The tentative agreement was ratified by both parties late afternoon. The strike ended. Here is the overview of the  settlement resulting form Tuesday March 3 mediation.

The tentative agreement was reached late at night.

We heard something big and pink is coming to St. Catharines!
University of Toronto workers from CUPE Local 3902 are heading to Brock University to support their sisters and brothers, the ESL instructors in Local 4207, who are on strike.
They’ll be travelling in style, aboard the famous Local 966 Flying Squad bus.

And oops, a you tube clip with the prez of 4207, Dan Crow, we forgot to post earlier.

If Brock held students’ interests on their priority list, it would not push workers on strike. Curiously those with cushy bureaucratic jobs, earning well over $100K a year, are sitting in their comfy offices on the 12th and 13th floors of the tower, while workers without whom ESL cannot run and without whom the University cannot milk revenues from international students, are walking the picket line for five days straight in their fight to get the Collective Agreement that Brock signed.

Again, you are doing fantastically well, feisty pickets, supportive workers and students.  The food and logistical donations are greatly appreciated!

Weathering the nippy cold, and sometimes very aggressive student drivers is on our daily agenda. We may forgive insults as they denote lack of education (weird thing to say about university students…) but trying to run repeatedly over a visibly pregnat person is not cool.

Here are answers to two questions. The first one concerns meaning of the clause Brock insists that the Union removes from the Collective Agreement after they have signed it, a.k.a. theerror. The second addresses  inquiries about lost pay when union members exercise their right not to cross the picket line.

And here is the answer to the question: does the University sincerely want to talk?

Check out this article on us in today’s St. Catharines Standard.

1) It seems like the University blocks access to our website if the link to it is included in our mass email to you, dear members. We can’t conclude this with certainty but clicking on the www.4207.cupe.ca link sent by us to your brocku.ca email account simply doesn’t work. If you are reading this then you have already discovered where we are online. We will still send  updates via email but please continue to check these webpages for further information.

Yesterday a solidarity contingent from CUPE 3906 (our sister local from McMaster) supplied us with a tent, chairs, umbrellas and many picket line necessities. Again, many campus workers, students and supporters came to picket with us. THANK YOU VERY MUCH! Thank you for helping us to demonstrate that the University Administration cannot get away with its egregious labour relations stunt, so far not heard of by those who work in the labour relations field. If an employer cannot even abide by the labour relations legislation of this province and plays either stupid or claims invincibility (of course, the recurring question is whether they are incompetent or cunningly vile), and can put frontline workers throught this trial of fighting for their jobs through the picket line, then the working conditions of the other workers on campus are in serious jeopardy.  An attack on one is an attack on all!

Michael Wick, President of  the Education and Training Employees Association, which represents ESL workers in 4 locals at private institutions in British Columbia. He called from Vancouver after hearing about our strike, and wanted to send a message of support to our members. The letters and messages of solidarity just keep coming in. I think this is incredibly encouraging to get a message from all the way across the country from a union representing workers who do the same jobs as our members.

I.A.T.S.E. Local 461 at Brock sent a message encouraging all its members “to go out in support of our CUPE brothers and sisters.  Our only strength as a union movement is in standing together.  If we fail at this, we will all see our rights and privileges attacked, eroded and eventually removed altogether. ”

Statement of the Graduate Students Association at Brock

The mediator called CUPE this morning and said that he had not heard from the Brock Administration but wondered if the Union would be willing to enter into talks again. The Union said yes. The mediator took the message to the administration but reported at 1 pm, March 27,  that the employer declined the invitation to re-enter talks.

As the University indicated in its statement of March 22, an error was made in the clause relating to contracting out. This is the only outstanding issue between the parties, and the University has made an offer to resolve this error.

The “offer to resolve this error” is in fact the very reason why the ESL Instructors are on strike.  There was no “outstanding issue” when the University signed off on the Collective Agreement on February 14, 2012. “This offer” constitutes a flagrant case of bad faith bargaining, The union filed a complaint with the Ontario Labour Relations Board on exactly these indictable grounds: Bad Faith Bargaining.

It is unconscionable that the University refuses to honor the very document they signed and blames the workers for making an “error”.  The only way to end the strike is to return to the ESL Instructors what was taken away from them –  their very first Collective Agreement!  Quality education cannot be provided by instructors  subjected to precarious working conditions. Stand up in solidarity with ESL Instructors! Their future is every worker’s future!

Big thank you to all supporters,you were fantastic!  Best wishes to those who are confused and act disorderly, and a song for those who chose to cross the picket line http://www.youtube.com/watch?v=yX46rPmXO4U

(The images are posters from the Republican side of the Spanish Civil War 1936.)

Today was captured on various social media and news. These will be posted here later.

We have received a large number of messages of support from members of Units 1 and 2, other unions, and supportive organizations. Here is a list of some of the support messages that have been sent:

CUPE 3902 – University of Toronto (have offered to send a flying picket)
CUPE 3906 – McMaster University (will be sending a couple of cars down this week – possibly tomorrow)
CUPE 3903 – York University (currently in bargaining for all units, and stands with us in our struggle)
CUPE 1295 – Maintenance, Trades and Custodial workers at Brock (members have been walking our picket lines during breaks and after work)
CUPE 1263 – long term care facilities in Niagara region (sends their support)
CUPE 150 – City of St. Catharines outside workers (sends their support)
CUPE 4156 – District School Board of Niagara (sends support, and will have members walk our picket lines)
CUPE 1287 – Region of Niagara/Lincoln County Humane Society (members walked our lines, and the local has loaned us strike materials)
CUPE 2220 – St. Catharines Library/Rodman Hall (members walked our line today)
Niagara District CUPE Council – sends message of support, and has been helping with the communications/e-actions
CUPE National – letter of support from the National President and the National Secretary-Treasurer (received today)
Candace Rennick – Secretary-Treasurer of CUPE Ontario (letter of support, commitment to walk our picket line)
BUFA – members of the Brock University Faculty Association walked the line, many members canceled classes in support of our strike
OSSTF District 35 – support staff at Brock (members walked our line, help with getting a strike office, $1000 donation to our strike fund)
IATSE – Stage hands at Brock – message of support.
Ontario Coalition Against Poverty – sent message of support, working on bringing a bus of supporters from Toronto.

The Niagara Animal Defense League fully supports CUPE 4207 in their struggle for good jobs and social justice at Brock.

The Socialist Party of Ontario sent a solidarity statement.

A message of strength and seniority form National Aboriginal Council of CUPE.

It looks like the 13 floor finally moved – the Employer just contacted the Union and asked for a meeting tommorrow at 4 pm in Toronto.

Here is a copy of the actual language that the employer signed and then refused to accept.

The employer will not honour the agreement they signed. The union has filed Bargaining in Bad Faith complaint with the Ontario Labour Relations Board. Brock has five days to respond. It would be much faster if they simply said “it is ratified!”

No to double-faced deals!

Here is the latest e-action. Please send the letter or compose your own to let the Administration know that their intransigent and contemptuous approach to the bargaining process,  the workers and the students, has to stop! The future of jobs for all university workers is in jeopardy if the employer gets away with non-compliance with the Ontarion Labour Relations Act. Moreover, the working conditions of university workers are directly connected to the learning conditions of students. Students themselves become workers who inherit the working environment fought for by previous generations of workers. Say no to precarious jobs! Stand up for your future.

Members of BUFA and Unit 1 please honour the picket lines of our sisters and brothers in UNIT 3. Article 9.02 of the Collective Agreement for Unit 1 stipulates: In the event that another employee group at the University establishes picket lines on campus, CUPE 4207 employees shall not be required to cross said line if they reasonably perceive it to be hostile. Time missed as a result of employees failing to report to work under such circumstances shall be unpaid.

On February 15 our union signed a tentative first agreement for our newest bargaining unit (CUPE 4207 Unit 3, representing all Instructors in ESL Services). Members of the bargaining unit voted to ratify the agreement on February 28. The employer, to date, has refused to let us know if Board of Trustees has ratified the agreement. When the Board voted on ratification, the employer claims that the tentative agreement was “ratified subject to changes”. This is not legal. The Board is not entitled to insist upon changes to the tentative agreement. They have either ratified, or they have failed to ratify. The Union has repeatedly asked “has the employer ratified the tentative collective agreement?”. The university refuses to provide an answer to this question. The union was told that we could expect an answer today at 9:30 a.m., but the employer once again failed to provide a response.

We will keep the membership up to date on this matter as events unfold.

On February 28 the union voted on the draft collective agreement that was prepared by the employer. Almost two weeks later the employer claimed that an error had been made. The union had already ratified the agreement by that point.

Once could perhaps be considered an error. Twice is quite a stretch. But when the same language is presented to us on three occasions, it strains credulity to say that this was an error.

It is time for Brock University to live up to the agreement that it made! 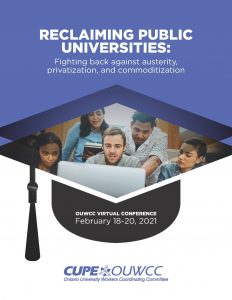