The Niagara Poverty Reduction Network (NPRN), in collaboration with the Niagara Regional Labour Council, is co-hosting a meeting to discuss worker’s rights in Niagara. The speaker will be Deena Ladd from Toronto’s Worker’s Action Centre.

On June 6th, 2015, Pride Niagara is proud to present its 4th Annual Pride in the Park Event. Taking place between 12pm – 10pm at Montebello Park in St. Catharines, PITP is an outdoor festival with LGBT/LGBT friendly entertainment. Live musical acts, Family friendly children activities, food and merchandise vendors, a licensed area and more. CUPE 4207 will have a booth present at the event. We hope to see our members come out and support our local LGBTQ community!

Pride Niagara was created to celebrate the diversity and future of Niagara’s sexual and gender-diverse community through the coordination of a series of arts & cultural events, including the annual Pride celebrations that empower and support our Lesbian, Gay, Bisexual and Transgender (LGBT) communities. With our success and continued growth since 2010, plans are already underway for Pride festivities coming in June 2015. All of our events can currently be found on our website at www.prideniagara.com. For further information please contact info@prideniagara.com Attention Event Director.

We at CUPE 4207 would like to share with our members an event happening from April 15th – June 18th, 2015. The purpose of this event is to speak back to the government’s racist policies and actions and to let them know that their actions are creating a culture of intolerance towards many Canadians.

The Chain Fast to End Canadian Government Racism is off and running, with participants from across the country. The fast was initiated in response to increasingly hostile, racist comments from government MPs, including Prime Minister Stephen Harper, as well as policies that very specifically target racialized communities (such as Bill C-51). It also acknowledges that such statements and policies are part of a long, horrible Canadian tradition of racism and colonialism. It runs until June 15 (the beginning of Ramadan).

You can fast as per your tradition (some people refrain from eating sun-up to sun-down, others do it for 24 hours. Some people will drink water or other fluids, others not).

You can sign up for a day (or more) by emailing tasc@web.ca  with suggested dates, which will be publicly posted at the Homes not Bombs blog site (http://homesnotbombs.blogspot.ca/2015/04/join-chain-fast-against-canadian.html). 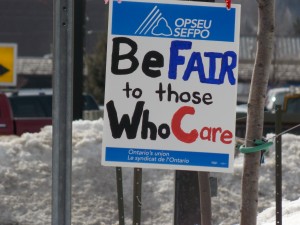 As you may not know the nurses and staff of OPSEU local 294 are on strike. They picket mainly on 149 Hartzel Road seven days a week from 7 am to 5 pm.

They will have a Town Hall this Saturday April 25th, from 1-3 pm at the Holiday Inn on Ontario Street where the issues of contention will be discussed.

Since some of the nurses will be attending this Town Hall, they will not have enough members on the picket line between 12 and 4 pm on Saturday April 25th.

This is a call for a SOLIDARITY PICKET with the members of OPSEU 294 on SATURDAY APRIL 25 between 12 pm and 4 pm. Please come, bring banners, placards, pots/pans, cats/dogs, anything to make the picket lively!

On Wednesday, April 22 from 1-3pm in Cairns 336 there will be a speaker series event that will focus on exploring youth work and education across international communities through stories of struggle from the global community.

Speakers will include: Alex Nascimento (Youth Worker) a past program director at “So-Mar: Solidariedade Em Marcha” a non-profit youth outreach program operating in the favelas of Brazil. Firoz Alam (Educator & Activist) a past educator in the public school system of Bangladesh and the Founder and President of the “WE Foundation Bangladesh”.

Light refreshments will be provided! For more information check out the event flyer.

The next Executive Committing meeting will take place on Monday, April 20th at 5:00pm in MC A323. All members are welcome to attend!

On April 28th, the Niagara Regional Labour Council (NRLC) holds ceremonies at monuments dedicated to injured and fallen workers at nine locations in the region. Join the workers, activists, community members and politicians to commemorate workers injured and killed on the job. We must be reminded of our collective responsibility to seek stronger health and safety protections, stronger enforcement and fair and just compensation. Please join us at the ceremonies to mourn for the dead and fight for the living.

Workers die on the job every day, while thousands more are injured or become sick due to their working conditions. In 2013 alone, 243 workers died on the job in Ontario. Disturbingly, studies demonstrate that fatality figures are grossly underestimated, with thousands more dying annually from occupational diseases.

These tragedies led our provincial and federal governments to proclaim April 28th as the Provincial and National Day of Mourning. Commemoration activities also take place annually in over 100 countries.

Here is a link to the Facebook event page.

We will be holding a free Steward Learning Series Workshop on Conflict Resolution for all CUPE members on June 2nd from 5-8pm in EA 103. There will be coffee and tea provided for participants. If you are interested please register by May 22nd at http://cupe.ca/steward-learning-series-conflict-resolution.

Our AGM will be held on Wednesday, April 8th at 4:30pm in AS 201. There will be food and beverages available at the meeting! There will be elections for all posts and the elections of 4 delegates to the CUPE National Convention on Nov. 2-6. Hope to see you there!

The next meeting of the Political Action and International Solidarity Committee meeting will be on Thursday, April 2nd at 12 pm in TH 306. Tentatively on the agenda for this month’s meeting will be the following:

To request that an agenda item be added to the list, please e-mail paisc4207@gmail.com