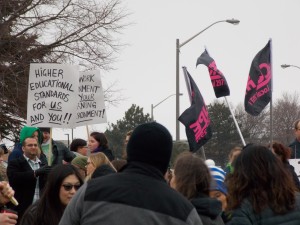 Over 60 ESL Instructors and supporters held a rally for the CUPE 4207-Unit 3 bargaining team outside the Four Points Sheraton Hotel near Brock University this Saturday morning. The team for the ESL Instructors and the university administration’s representatives were scheduled to meet with a government-appointed mediator at the hotel at 10 AM and bargain throughout the day.

Instructors and supporters from the community carried placards stating “It’s Time to Talk” and “It’s Time to Listen”, a sign of their frustration with the university administration’s poor record to engage in bargaining over the past 8 months. “I think we’ve been pretty patient for a resolution (to bargaining) but they have been cancelling and postponing meetings… now we’re out here today to show we are serious about our proposals and that we want a fair agreement”  said Ian Wood, a contract worker in ESL Services. “The administration’s side should be focused on this goal even if it is very late at coming to the table.”

Others carried the message that they want fairer working conditions. “We’re tired of being taken advantage of, and as painful as it may be for the administration they need face the fact that their treatment of instructors has been grossly unfair for too long.” Glenn Ewing, who has been doing a full workload for 5 years but is treated as a permanent part-time employee.

The university administration and instructors are in a legal strike or lockout scenario as of Tuesday, March 17 at 12:01 AM. The deadline was originally Saturday, March 21, but the administration requested it be changed to an earlier date.

CUPE 4207 encourages the community to visit their website CUPE4207bargaining.ca for updates and information on bargaining and for suggestions on how to help reach a fair collective agreement.

On Saturday March 14, our Unit 3 Bargaining Committee is meeting the employer at 10 am, at the Four Points Sheraton Hotel. We call upon you for support; we are planning to rally in front of the hotel from 8:45 am (our BC team is meeting at 9 am) to 10:15 am. The idea is to have as many people as possible on site to welcome our team and be visible as the employer arrives at the hotel. We would stay long enough to see our team to the beginning of the crucial meeting. Don’t forget to wear GREEN!!

We hope to see you there!

It is amazing to see the support coming in from other CUPE locals who want to see our ESL Instructors receive a fair collective agreement. Thank you for your support!

MEDIA RELEASE – Will Brock University invest in their own workers or cause a service disruption – March 11 2015 from CUPE Communications.

We want to thank both CUPE 1295, the Custodial, Trades and Food Service Workers at Brock University, and Niagara Regional Labour Council for sending letters of support to the ESL Instructors in receiving a fair collective agreement.

Here is a letter to our members about helping our ESL Instructors get a fair Collective Agreement.

The next meeting of the Political Action and International Solidarity Committee meeting will be on Monday, March 16th at 2 pm in MCJ 205. On the agenda for this month’s meeting will be a discussion on what the committee can do for Unit 3 in bargaining. The strike deadline is March 17th.

Also on the agenda on the 16th will be the delivery of the new statue and possible actions around the new multi-million dollar centerpiece in front of the tower. We will also continue our discussions on budget cuts and the program review, the federal election, and the March 24th Day of Action on Tuition.
To add agenda items, please e-mail paisc4207@gmail.com

Sign our petition and send a message to Brock University telling them you support Brock’s ESL instructors’ quest for a fair contract.

For more information about ESL Instructors Bargaining check out!

A “no-board report” was issued on Feb. 28, and the Union requested a strike deadline of March 21st at 12:01am. However, the employer insisted on a date of March 17th at 12:01am. The reasons for this were not made clear. Please check the website for bargaining updates!