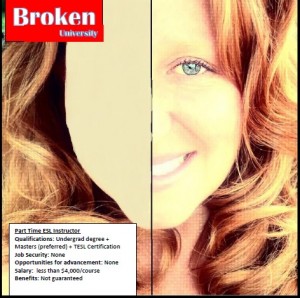 ESL Instructors (CUPE 4207 Unit 3) are negotiating to improve the following:

Check back to see more updates on their bargaining!

As negotiations with the employer have continued to go poorly, the Unit 3 bargaining committee has decided to set a strike deadline of March 21st, 2015. In order to prepare for a potential strike action, a number of strike prep teams have been created. Although this is Unit 3 bargaining, all members of CUPE 4207 are welcome to join these teams. You can find a short description of each team here along with the current number of members. Anyone interested can contact the Unit 3 Bargaining Committee and Bargaining Support Committee at unit3bargaining@gmail.com. In Solidarity, Unit 3 Bargaining Support Committee

We met with the employer again today. We were at the hotel from 9:00 am– 7:00 pm trying to put together a proposal that would resolve the outstanding issues. Unfortunately, the employer continued to deny our main proposals.

We will be calling a unit meeting at some point in the next few weeks to get your input on how we should next respond to the employer. We strongly encourage everyone to attend.

We hope that everyone has had a safe and relaxing holiday and a great start to 2015.

The Executive Committee of CUPE 4207 would like to remind you that workplace harassment, including that from another member, is unacceptable. According to the CUPE Equality Statement, “union members are equal and deserve mutual respect at all levels.” As well, “we should neither condone nor tolerate behaviour that undermines the dignity or self-esteem of any individual or creates an intimidating, hostile or offensive environment.”

Any behaviour that creates an environment in which a member feels threatened or unsafe is unacceptable. CUPE 4207 will not tolerate harassment of any member in any form.

“Discrimination and harassment focus on characteristics that make us different; and they reduce our capacity to work together on shared concerns such as decent wages, safe working conditions, and justice in the workplace, society and in our union.”

If you have a matter of concern, please contact the Executive so that any issues that arrive may be dealt with in a respectful and safe manner.

We met with the employer at 10:00 this morning and presented a proposal with a few small modifications. We then waited 5 hours for a response, which was that they didn’t have the mandate to provide a response at this time. They will be in touch with us early next week to let us know if we will be meeting again next Friday, or if they need more time than that to develop their response.

As always, feel free to contact any BC member with any questions, comments, or concerns about the bargaining process.

The Bargaining Committee met with the employer and a conciliator today in an effort to further our progress on coming to an agreement. Unfortunately, the employer wasn’t willing to make moves or discuss our major issues. We have worked on amending our previous proposal, which we will present to the employer at our next meeting on Friday, November 28th.

Additional details will be provided at our meeting this Wednesday at 4:00.
Thanks,
The Bargaining Committee

Unit 3 voted 85% to authorize a strike, if necessary. It should give our committee the confidence to go into conciliation (which will be held on November 21 and 28) and get a good contract for our members.

A meeting will take place on Wednesday, October 8th in WH 8G from 4:00 p.m. – 6:00 p.m. This meeting will allow Unit 3 members to have their questions answered and allow for voting. Thursday, October 9th, we will have the ballot box open in the union office from 9am – 5pm to allow members who can’t make it on Wednesday to vote.

We met with the employer this morning to receive their response to our last round of proposals. Unfortunately, their proposal did not address any of the points identified by us as priorities. They stated that they “were not interested in addressing job security language” at this time.  The proposal they presented would actually make our Collective Agreement worse for us in several places. As for wages, they suggested a very small lump sum payment for 2 of the 3 years of the Collective Agreement.

Because they aren’t making any moves, we have decided to file for conciliation. We will be working with John and Katarina to arrange a good time for a face-to-face meeting with all members in the next few weeks. Attendance by all members is strongly encouraged.

A new bargaining date had been set. We’re meeting with the employer on Sept. 11th and we expect to get a complete response to our comprehensive proposal at that time. We will update you after the meeting.

Unfortunately, there is nothing to update today. A meeting was scheduled for today, but was cancelled yesterday by the employer.

They stated that they need more time to work on a complete response to our proposal. They said they should be more prepared to meet in September, but no date has been set yet. We will keep you posted.

Enjoy the rest of your holiday,

The Bargaining Committee met with the employer for the third time on July 30. At this meeting, we presented our second round of proposals, including a wage proposal. The university will respond by presenting their next round of proposals at our meeting on August 22.

The U3 Bargaining Committee met with the Unit on July 15. An update on Bargaining was provided. AT the next meeting with the Employer on July 30, the Committee will present a response to the employer’s proposals. The response will include a wage proposal.

Your U3 Bargaining Committee is committed to Bargaining for a deal that includes PMPC and PMPB courses.  Unit 3 has demonstrated that we are the best choice to serve as Instructors of these courses and all ESL courses.

As always, please see us with any questions,

The Unit 3 Bargaining Committee met with the Employer on June 27 and both parties exchanged Proposals. Two meetings have been scheduled for the month of July.

We have set a date for our first meeting with the employer. We will be meeting on Friday, June 27th at 10:00am. The location of the meeting will be confirmed once a room is booked.

Days after hearing that the university is in serious financial trouble, it has come to our attention that Brock has hired a lawyer, Andrew Zabrovsky, from the Hicks Morley legal firm as Chief Negotiator for the University to negotiate the Unit 3 Collective Agreement. Hicks Morley are a well-established law firm and the university will be paying Mr. Zabrovsky handsomely to negotiate this contract.
The other members of the University’s Bargaining team are Norma MacSween and Wanda Trottier (Senior Employee Relations Officer). It perplexes us why the university would see the need to hire externally for Chief Negotiator.

This leads us to believe that a hard round of Bargaining is upon us.

BUFA (the Brock University Faculty Association) will be negotiating their contract at roughly the same time as us. The University has chosen Varujan Gharakhanian (Director, Faculty & Employee Relations) as Chief Negotiator to negotiate the BUFA Agreement.

Why is the university choosing a Brock employee to negotiate the BUFA contract and hiring a high priced lawyer to negotiate our contract?

We need your support and solidarity as we enter negotiations. If you haven’t already done so, please consider joining the Bargaining Support Committee.

On Wednesday April 9, Brock held a Town Hall meeting open to everyone from the Brock community. At this meeting, Brian Hutchings, Vice-President of Finance and Administration, presented the university’s present financial status. This was an important event for the bargaining committee, as it gave us a glimpse of what we will be facing at the bargaining table. The university presented a bleak financial situation with millions of dollars of debt and no foreseeable solution. They are doing everything they can to cut cost and find profit. Hutchings stressed that “nearly 70 per cent of its $300-million budget is personnel costs – salaries and benefits – and that job cuts are unavoidable” (Brock News).  As we enter the next round of bargaining, we can expect the Employer’s Bargaining Proposals to reflect the bleak financial outlook present by Hutchings.

Below are some notes from the Bargaining Committee members who attended the meeting.

Follow this link to read the story in The Brock News http://www.brocku.ca/brock-news/?p=27520

The university is trying to save the following to reduce the current deficit.

By implementing the following measures…

The VP of Finance and the President of the University repeatedly pointed out the ‘high’ personnel costs and announced the following actions in terms of jobs.

The university has announced that there are still 27 positions need to be addressed and the H.R will notify all Union Presidents and proceed with the job cuts by April 30thof this year.

The VP of Finance has mentioned Labour Relations moving forward indicating that the University will negotiate any potential Collective bargaining reflecting these current financial challenges.

Having big, shiny, new buildings at Brock comes at a price.  That price appears to be $7.6 million annually.

These are not one-off expenses; these budget lines will be part of Brock’s budget for many years.

Also, Cairns adds absolutely no new teaching space, and the downtown building only adds teaching space if the old departments in fine and performing arts are renovated to make them appropriate spaces for teaching. So, there is no chance that these spaces can be used to increase enrolment to generate income – and applications are down anyway.

The Brock University Pension Plan’s shortfall is contributing to the deficit as well (to the tune of $5.8 million for the 2014-2015 year).