Come support Theresa “Toad” Jamieson – a Six Nations land defender – on Wednesday December 12th at 10am, at the Cayuga courthouse. She is facing charges stemming from when anti-Native rights activist Gary McHale forced his way down the road at the reclamation site, Kanonhstaton, on February 18th, 2012. Watch this disgusting injustice here: http://www.youtube.com/watch?v=HJOEkBwtnYs

McHale marched onto Kanonhstaton, accompanied by several OPP officers, attempting to make speeches about how the OPP are racist against white people. McHale was clearly trying to provoke Six Nations Land Defenders, until they were arrested. Toad, along with several other land defenders, were then given conditions that did not allow them to return to Kanonhstaton.

We must stand together to resist the actions of the colonial courts in criminalizing Six Nations land defenders. In court on December 12th, Toad will be fighting to live by the Great Law, as she does every day. As treaty people on this land, we must fight these outrageous violations of treaty rights and the Great Law, by building support for Toad, and our other friends and allies at Six Nations. A packed court room of supporters will make a strong, necessary statement.

If you can drive or need a ride from any of these cities, please contact:

Cars will be returning at various times throughout the day.

Below is a call out for support from the April 28th Walk to Kanonhstaton (the land reclamation site in Caledonia). The six year anniversary has come and gone and all levels of Government are uninterested in negotiating to resolve land claim issues on the Haldimand Tract. It is up to us to build the community support to force those elected leaders into a position to negotiate.  CUPE 4207 fully supports the Walk to Kanonhstaton and has offered to help fund a bus from St. Catharines to Dunnville to Kanonhstaton and back for the day of the rally. This support is vital to ensuring that the bridge between our communities grows stronger. Labour has been a strong ally at Kanonhstaton for the past six years, with CUPE, the CAW, Steelworkers, and more doing much of the solidarity organizing work on site. Together we are strong and together we can force a resolution in the face of racism, xenophobia and reckless “development.” Please come out to support this vital cause.  A place on the bus can be secured by emailing cupe4207@brocku.ca and indicating you wish to go on the April 28th Walk to Kanonhstaton.

The April 28 Coalition is a grassroots initiative aimed at making a positive contribution to resolving the conflict in Caledonia. The event we are planning on April 28 is going to be a large and powerful show of support for peace, respect and friendship. We are estimating that over 1000 people will join us in our walk and celebration. After we finish walking through Caledonia we will end up at Kanonhstaton (the former Douglas Creek Estates) for a gathering that will involve live music, free food, games and sporting events, and much more. 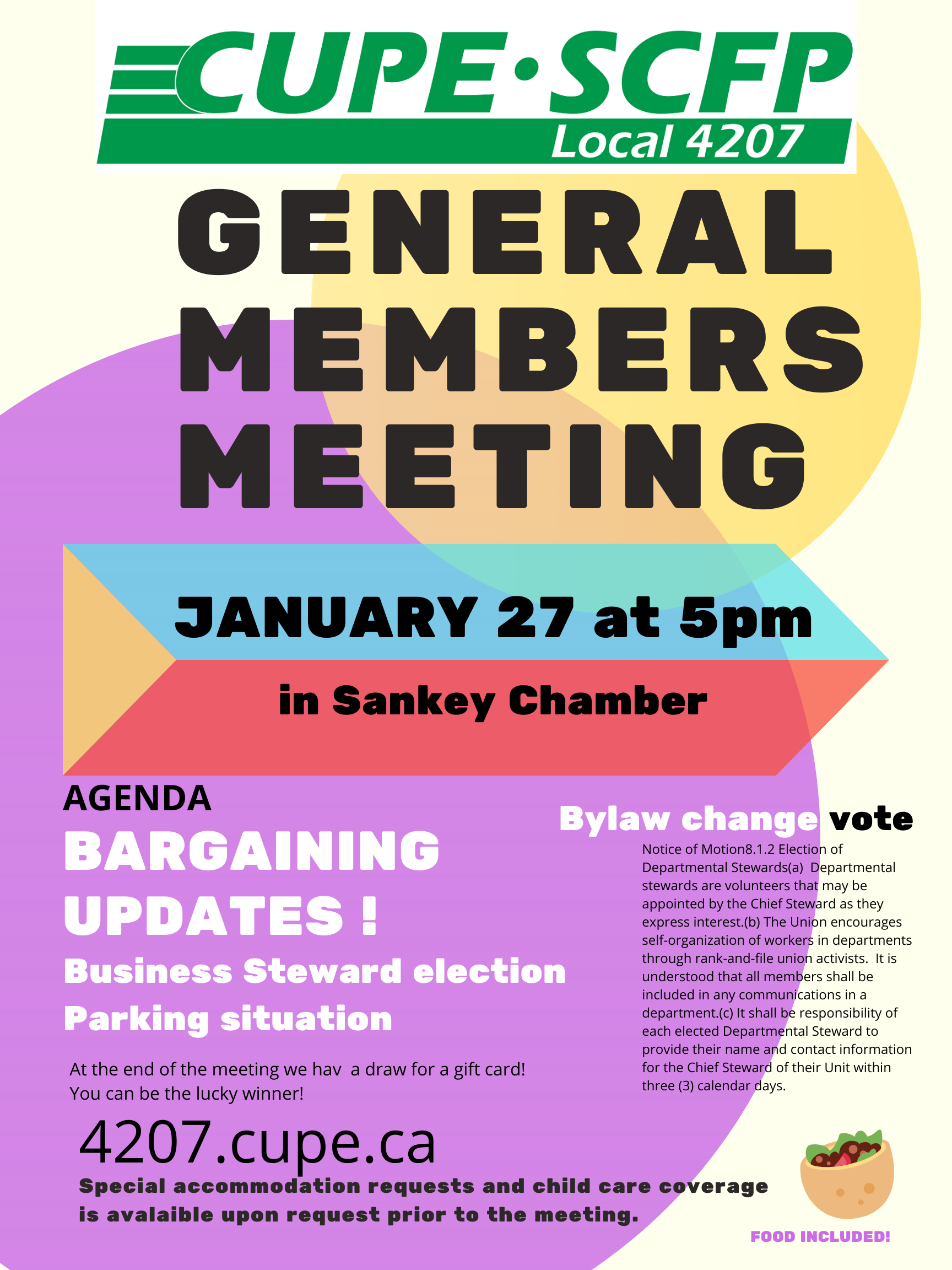 We will vote on this motion that was announced at the last GMM. Remember the rule – first the notice of motion to be made, then at a subsequent GMM to discuss and vote on it.   Notice of Motion 8.1.2 Election of Departmental Stewards (a)  Departmental stewards are volunteers that may be appointed by ... Read more...
Feb
19
Wed
5:30 pm CUPE Education – Note taking wor... @ Niagara Area CUPE Office
CUPE Education – Note taking wor... @ Niagara Area CUPE Office
Feb 19 @ 5:30 pm – 8:30 pm
When: February 19, 2020 @ 5:30 pm – 8:30 pm Where: Niagara Area Office 110A Hannover Drive St. Catharines Any member can attend this workshop. Do not be fooled into thinking that this is a bird workshop about taking any notes! There is much of union education that is involved in processing and understanding labour ... Read more...
View Calendar
Add