When it comes to the climate crisis what’s at stake? What’s the science? Where do pensions fit in?

Join the Ontario Federation of Labour for this free virtual conference that will address the role of pensions in working towards environmental justice​. 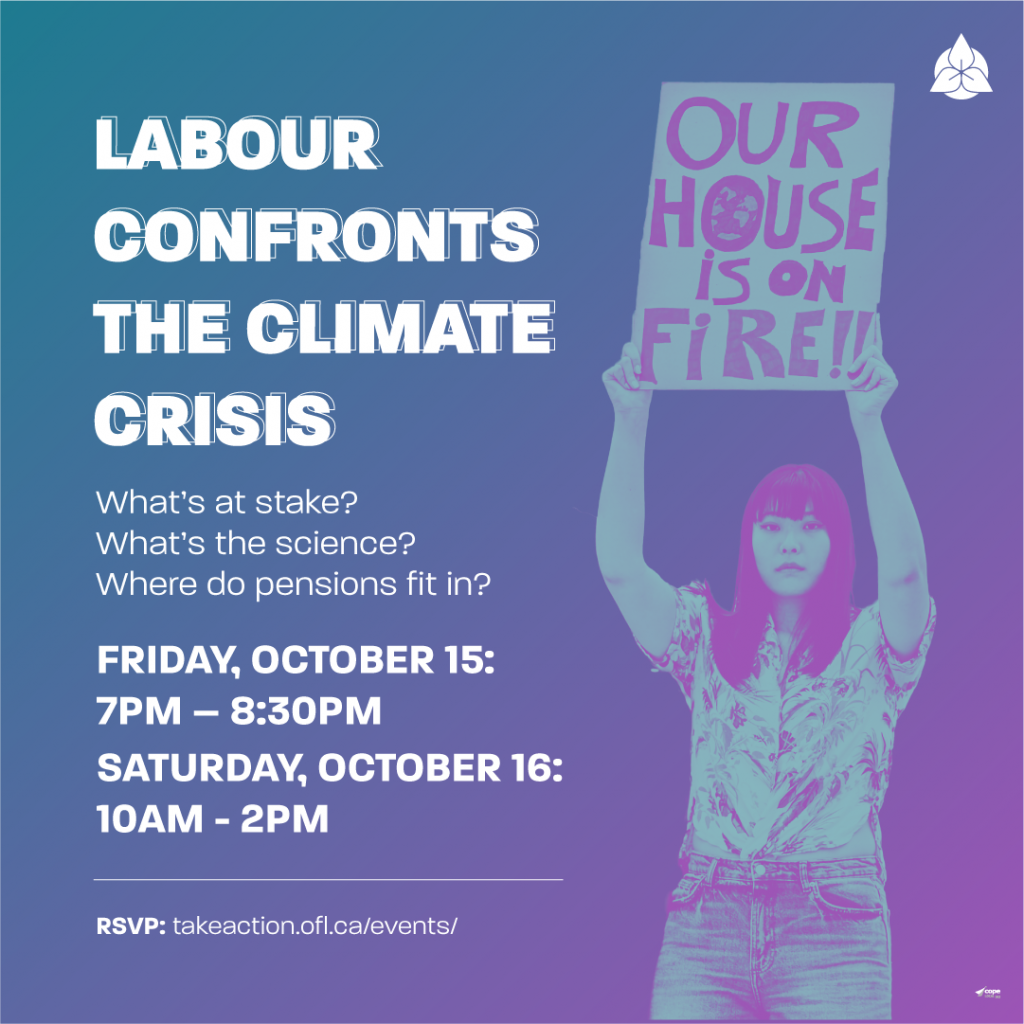 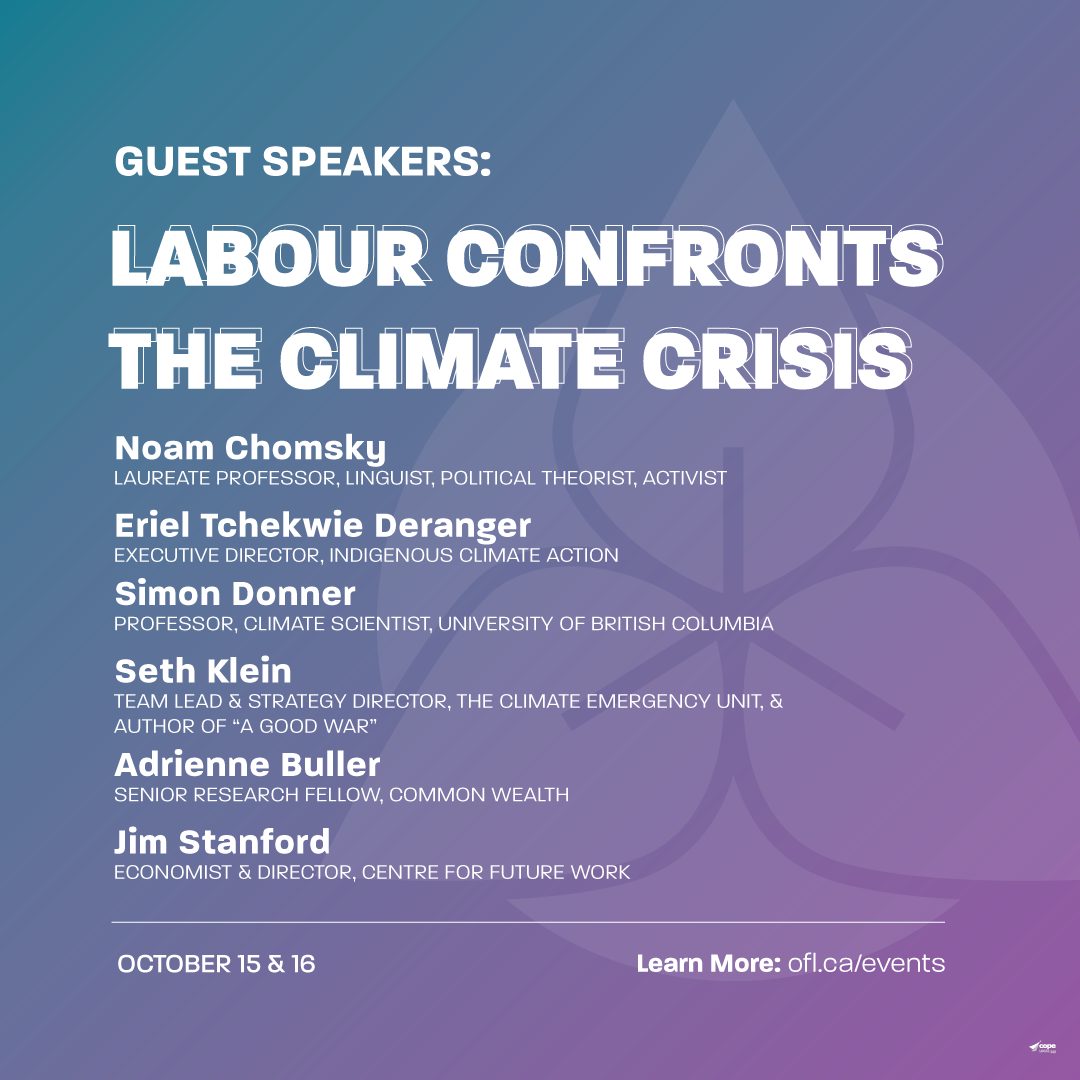 CUPE 4207 has donated $500 to the Woodland Cultural Centre  and the Save the Evidence campaign.
Save the Evidence is a campaign to raise awareness and support for the restoration of the former Mohawk Institute Residential School, and to develop the building into an Interpreted Historic Site and Educational Resource. https://woodlandculturalcentre.ca/donate/
Your Exec committee & Stewards are committed to Calls to Action & support Reconciliation initiatives. #Indigenize #Solidarity #OrangeShirtDay 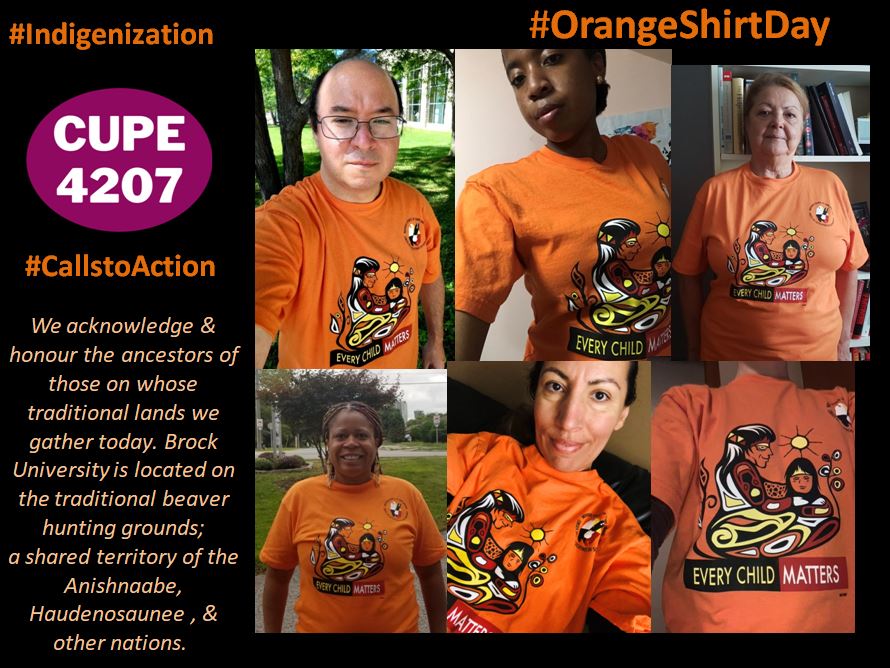 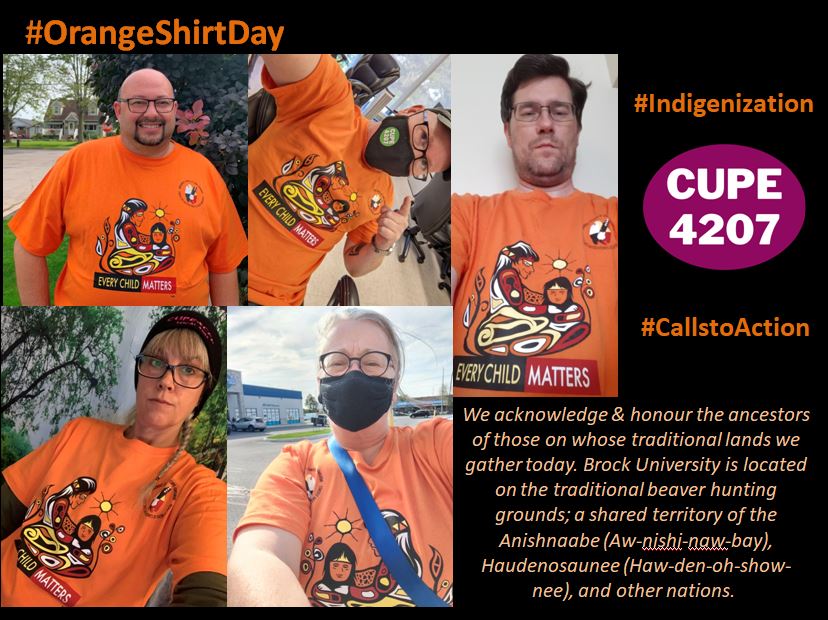 Tracy offered her insights and experiences that tackled questions such as: What role do academic labour unions play in reconciliation with Indigenous, Métis, and Inuit Peoples? How can CUPE 4207 members incorporate Calls to Action into their work practices –  lectures, assignments, seminars, lab demonstrations, office spaces and student interactions? 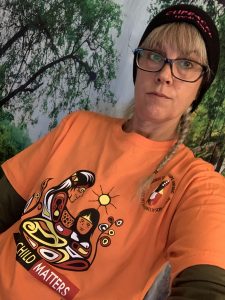 Here are the PDF slides for Tracy’s talk:

CUPE 4207 & the Indigenization of Post-Secondary Education

You can listen to the recording of Tracy’s talk here:

Many thanks to everyone who joined us!

On behalf of CUPE 4207, we acknowledge and honour the ancestors of those on whose traditional lands we gather today. Brock University is located on the traditional beaver hunting grounds; a shared territory of the Anishnaabe (Aw-nishi-naw-bay), Haudenosaunee (Haw-den-oh-show-nee), and other nations. We welcome and acknowledge all Indigenous Peoples who have joined us including First Nation, Métis, and Inuit, and we also welcome members of settler society.

How can CUPE members contribute to truth and reconciliation with Indigenous people? What can we learn from Indigenous CUPE members and their experiences and activism? And how can we support the fight for justice for today’s generation of Indigenous children and youth?

These and other questions will be addressed at a free, national webinar hosted by CUPE’s Human Rights Branch, in collaboration with Union Education.

What:            A Conversation about Truth and Reconciliation for CUPE members

For years, Indigenous people have been organizing and educating Canadians on the legacies and impacts of the country’s residential school system. Since 2013, advocates have organized awareness campaigns to coincide with September 30, calling it “Orange Shirt Day”.

Orange Shirt Day has become a national rallying point to support Indigenous people’s calls for justice and healing for all those affected by the residential school system. The day also acknowledges the pressing need for justice for Indigenous children and youth today. Indigenous children continue to endure sub-standard health, housing, education and social supports compared to all other Canadian children.

This past June, the federal government passed legislation that made September 30 the National Day for Truth and Reconciliation.

The Truth and Reconciliation Commission of Canada called for such a day to “honour survivors, their families, and communities, and ensure that public commemoration of the history and legacy of residential schools remains a vital component of the reconciliation process”.

CUPE is honouring this year’s National Day with two webinars for CUPE members, one in French and one in English. (For information on the French webinar, click here.)

Email education@cupe.ca for more information, or if you need help with registration.

Debra Merrier is Cree, originally from Grouard, Alberta. She has been an active member of CUPE 728 in Surrey, British Columbia since 2004 and has held the position of Aboriginal youth care worker in the Surrey school district Aboriginal Department since 1996. Debra has dedicated herself to empowering Indigenous Peoples in Canada, fighting for justice for murdered and missing Indigenous women and girls, and initiatives including the Truth and Reconciliation Commission, the Moose Hide Campaign, Orange Shirt Day, and Aboriginal Veterans Day. She believes in the power of sharing our history and our acknowledgement of our Peoples and Elders.

John Brady McDonald is a Nehiyawak-Metis writer, artist, historian, musician, playwright, actor, and activist born and raised in Prince Albert, Saskatchewan. He is from the Muskeg Lake Cree Nation and the Mistawasis Nehiyawak. The great-great-great grandson of Chief Mistawasis of the Plains Cree, as well as the grandson of famed Metis leader Jim Brady, John’s writings and artwork have been displayed in various publications, as well as private and permanent collections and galleries around the world, including the Canadian War Museum in Ottawa. John is one of the founding members of the P.A. Lowbrow art movement, and served as Vice-President of the Indigenous Peoples Artists Collective for nearly a decade. John also served a term as vice-chair of the Board of Directors for Spark Theatre, and as a Senator with the Indigenous Council Committee of CUPE Saskatchewan. John is the author of several books, and lives in Northern Saskatchewan.

Dr. Niigaanwewidam Sinclair is Anishinaabe (St. Peter’s/Little Peguis) and an Assistant Professor at the University of Manitoba. He is a regular commentator on Indigenous issues on CTV, CBC, and APTN, and his written work can be found in the pages of the Exile Edition of Native Canadian Fiction and Drama, newspapers like The Guardian, and online with CBC Books: Canada Writes. Niigaan is the co-editor of the award-winning Manitowapow: Aboriginal Writings from the Land of Water (Highwater Press, 2011) and Centering Anishinaabeg Studies: Understanding the World Through Stories (Michigan State University Press, 2013). He is also the Editorial Director of the Debwe Series with Portage and Main Press. 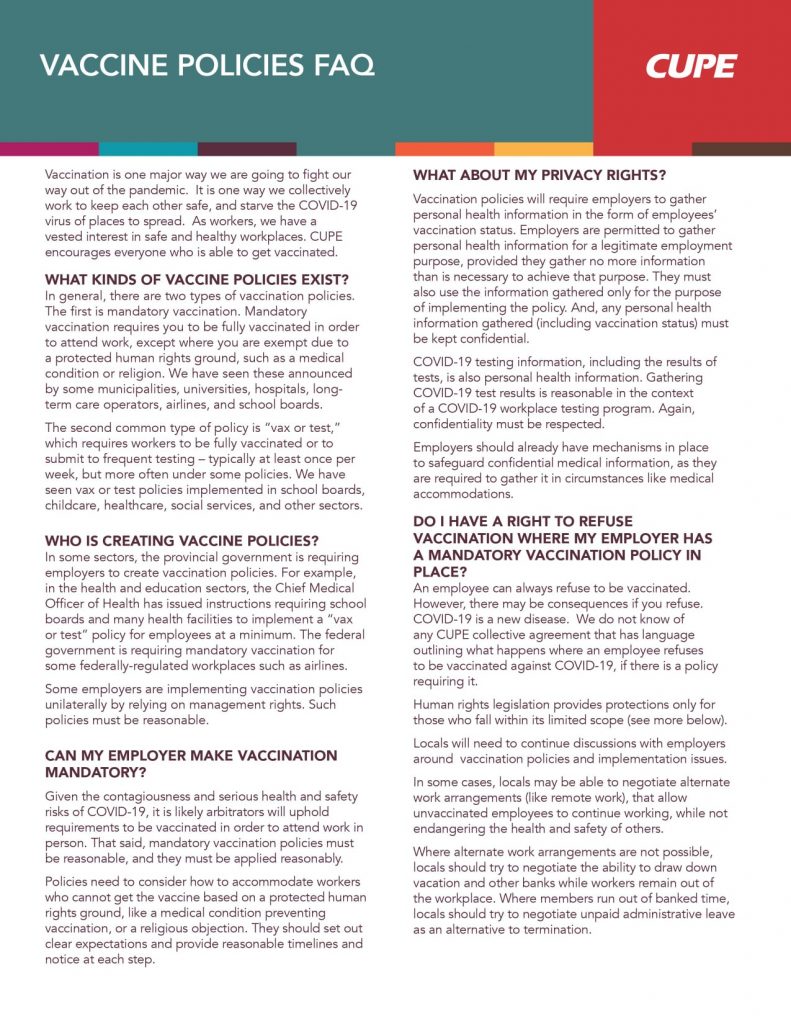 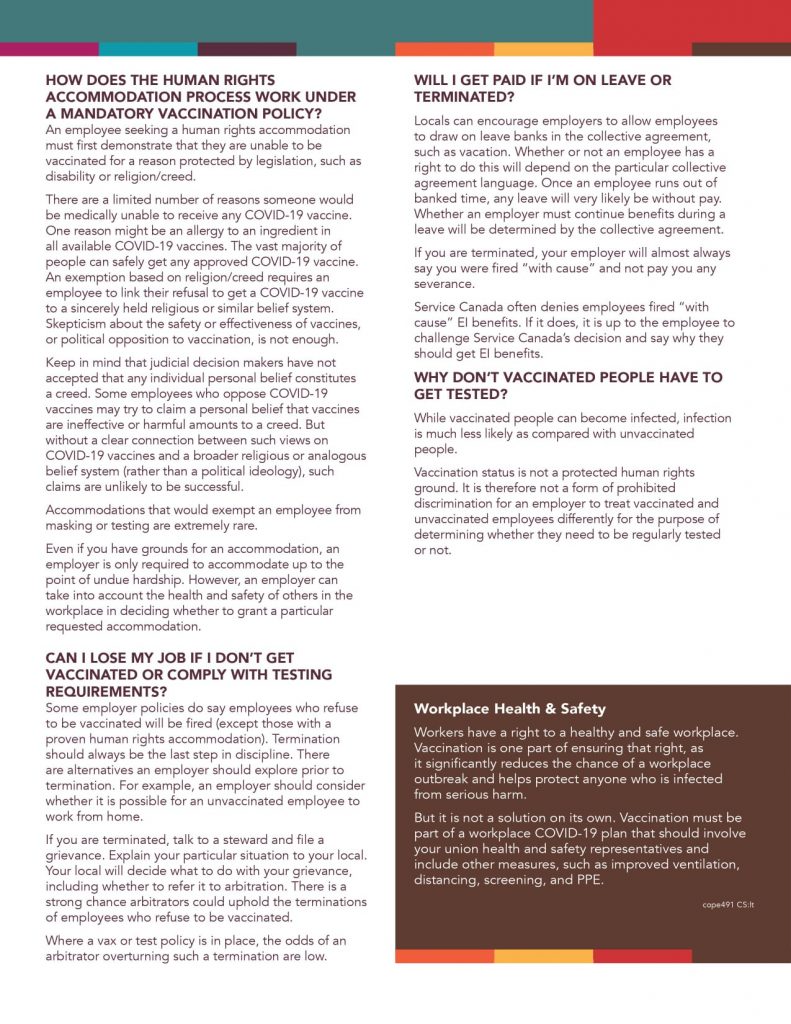 Reporting to the President of CUPE Local 4156, the successful applicant will be a key part of the CUPE 4156  team.

The individual will provide confidential administrative support and secretary services, coordination, consolidate,  and review the expenditure of the budget for the President in a computerized office environment, and act as  liaison between the President, the executive, the membership, vendors, affiliations.

To apply, email your cover letter and resume to 4156president@gmail.com using “Executive Assistant” as your  e-mail subject line before 4:00 p.m. on October 1st, 2021. We thank all the candidates for their interest,  however, only those selected for an interview will be contacted.

With the return to in-person learning happening this week, it is important to be clear of the policies that will be used for the Fall term so that we are all prepared. At the same time, it is important that epidemiologists and public health experts are highly critical in the return to in-person learning too soon, especially when all Brock community members will need is the first dose to be able to go onto campus until September 28th.  With that noted, the Executive Committee and the Stewards have been working to keep member concerns on the table and to advance to protect the health and safety of members and students.

For the polices, here are important points at a glance. Please see this resource for all of the details that the Administration is putting out.

Staff will need to complete self-screening through the Brock Safety App or on the Brock website before attending campus. You will receive a report from the app, and will need to email that report to your immediate supervisor. They will then send that report to the chair of the department or the director of the center in which you work. If you are not feeling well, then the Administration is requesting that you stay home. There won’t be monitoring at entrances, but you could be asked to provide proof of completion.

Anyone on campus will need to wear a mask, unless you have received an approved accommodation to not wear a mask. We are also working to ensure that members receive a list of students in your classes that have also received an accommodation. While it is recommended to use a medical mask, non-medical masks (cloth masks, for example) are also acceptable.

However, if you are not able to maintain at least 2 meters distance, and are working with someone who is not wearing a mask, then you also need to wear eye protection or a face shield. We have been informed that departments will provide this to members. Please contact the chair of your department for more information. If you request eye protection and are denied, please email us at info@cupe4207.org.

While there is a mask mandate, there isn’t a sense on how this will be enforced. Faculty and staff have been told that there is no expectation for us to enforce the mandate, and we are being discouraged from centering out students who are not wearing masks. Rather, we are to approach these students with compassion and understanding, although our members have not been receiving any of that. While it is true that students with accommodations should not face informal sanctions, members also have the right to work in a safe environment. We ask that you contact your immediate supervisor for a list of students who have received an accommodation to not wear a mask.

In response, several departments are encouraging members to hold virtual office hours, as well. If you do not feel comfortable being in an office that may not be cleaned regularly, please ask your direct supervisor for permission to do virtual office hours. You do have the right to a safe working environment.

The policy adopted by the Administration is to require either to be fully vaccinated or to aim to be have received the second dose by September 28th. Accommodations will be provided on bona fide grounds, and those receiving an accommodation would need to be tested twice per week. More details can be found in emails from Brock Communication and on the University’s website.

However, the Administration has noted that those who had signed contracts for in-person work and have chosen not to be vaccinated, then your contract would be cancelled. If you have had your contract cancelled, please email us at info@cupe4207.org. We want to ensure that your rights under the Collective Agreement are being protected.

If you have any concerns, please email us! We will also be re-opening our office on a limited capacity starting the week of September 13th. Finally, our first General Membership Meeting will be held September 16th at 5 pm. 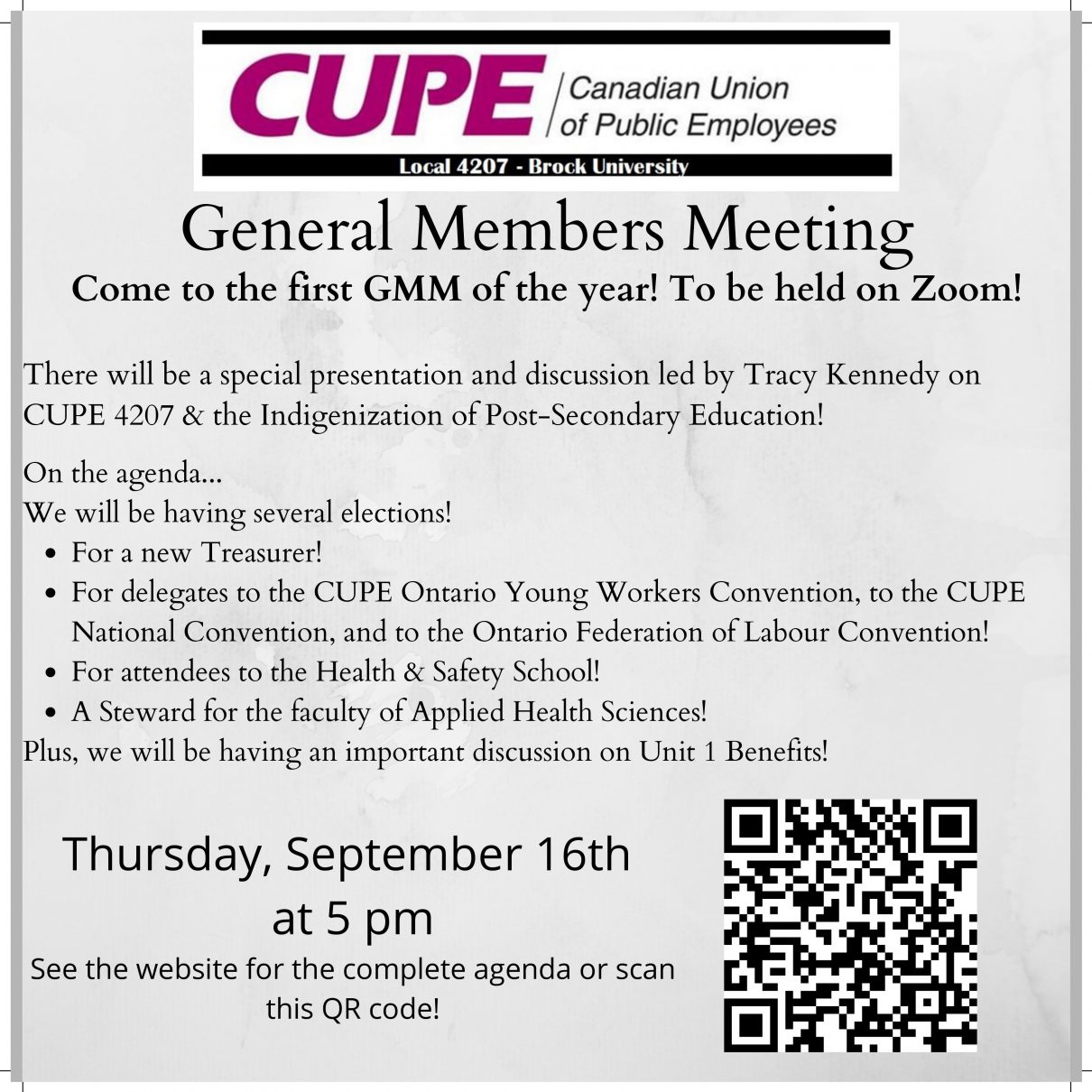 The Equity Committee is a group of members who advocate for CUPE members who are from equity seeking groups (women, Aboriginal peoples, LGBTTTQQ2SIA, workers with disabilities, visual and racialized workers, and young workers). Committee members are involved in communication, education, events and work to support the diversity of our members at Brock University and within our community.

If you have an idea for an event or campaign, or would like to partner on a project please contact the Equity Officer (equity@cupe4207.org). 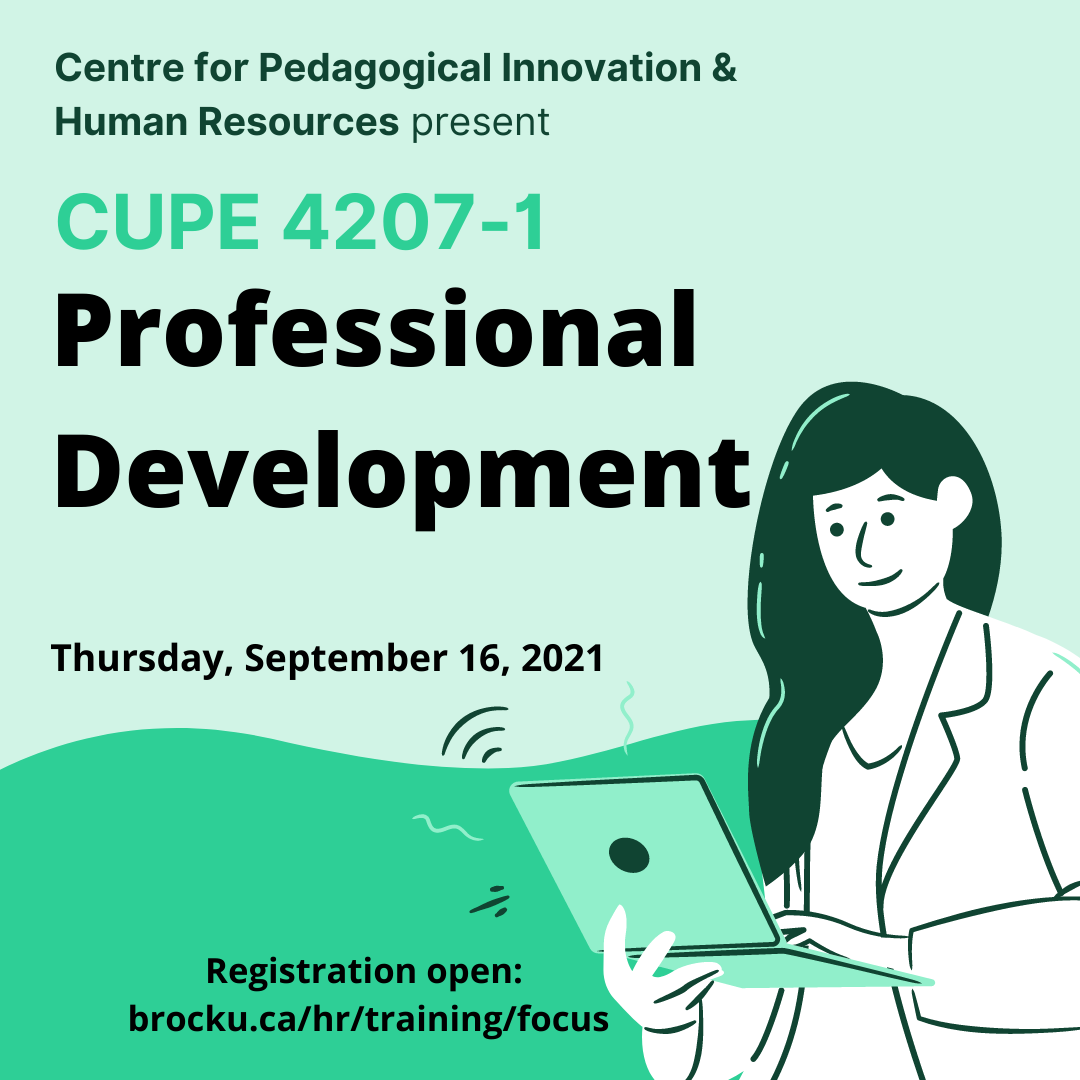